On Saturday April 12th morning, I found myself preparing refreshment food in a hip-loft-like office. It was my first time being there although my big brother talked a lot about the free space available for young entrepreneurs in one of Jakarta’s main business area. We were getting ready for the 3rd Positivo Meetup held in Ciputra Gepi Incubator office.

Positivo is community meetup initiated by my brother, Rama. He wants to encourage people to have positive attitude and eventually share it to others. I have been supported him for this, and it is not solely because he is my sibling (which I’m glad that I am), but also that he started a community that I have huge interest in it. In fact, the community keeps leading me in all social activities and those cool people that I am involved so far. It is profoundly confirm my own dream. In case you want to catch up with us, read on the part of the stories of the first and the second meetup in here.

Like other community, Positivo started small. On the first meetup we began only with 5 people. It grows slow but steady and sure. After organizing two meetings, Rama decided to have more focus in our direction. He briefly had talked about it to me in our family dinner, but I didn’t expect it (or him) to be this good. There are three keys points that he wants Positivo to be focus on:

“Educateyourself, inspire others, change the world”

Besides that, he also clarified the mission that perfectly fit Positivo to be:

I totally like the new idea and it is pretty much reflection on what we are doing. “If we gather and work together, we can change something”, said Rama in the middle of his Positivo presentation. In the end, he wished that more people can contribute on sharing ideas to have better result and sharing on social media.

The rise of Social Entrepreneurs

*Excuse for unclear photos, the backlit was terrible due to the strong sunlight

Vikra and Badar from kitabisa.co talked in an interactive presentation with title ‘Putting the sexy in social’. The word ‘sexy’ in here was meant as seduction in promoting social projects. The main idea of kitabisa.co is crowdfunding. Those kind people from kitabisa.co believe that this country is not lacking of kind people, it just that most of people are busy.

Kitabisa roles to ‘connecting kindness’. As an online platform, Kitabisa connects the project owner to the volunteers and donators. So the good cause of a social project will spread wider to more people. Definately worth to check out their site! In one second you will get inspired to help others!

This one was the new social business from George, our friend who always be the guest speaker (maybe he’s no longer a guest) in every Positivo meetup. The idea of inspiration bag, of course to inspired people, but not only from the bag’s look, also the purpose of the bag.

From the outside, the bag has one written-famous-inspiring quote. So when you wear it around the street, it will seen by others and hopefully they will get inspired to do something good. Yet the real purpose of this bag is to donate to the slump children for every purchase of this bag. The donation will go through his foundation, Sjors Foundation. One of the areas that he supports is where we had the present project. So besides a bag, you will get a pin as well. The pin will have a code number that you can enter to the website, and you will see the child who receive your donation and for what kind of purpose that the donation is used. His target market is worldwide, so everyone can get the bag. It will become very private and very close to the children. However, it is still under development especially for the website. I can’t wait for him to launch this!

Ayo peduli (English translation could be: let’s care) is a platform to give solution from the problem found by the local society. It focuses on three major area: health, education and environment. Gufron, the leader of ayopeduli shared one of his big projects, to re-preserve Mangrove Concervative Area. The area is in the Eastern Jakarta’s suburban, Bekasi town, on Muara Gembong village.

The action of ayopeduli is to encourage the people outside the village to visit and to re-plant the mangrove. Of course they also educate the village people to improve their awareness and behaviour that the conservative area could the economy source for them. Indeed Gufron showed us some pictures that the area has potential as tourist attraction as well. This conservative area is very important because without the mangroves, the city of bekasi (actually where I also live) will be drawn by the sea little by little. In fact it has already started! 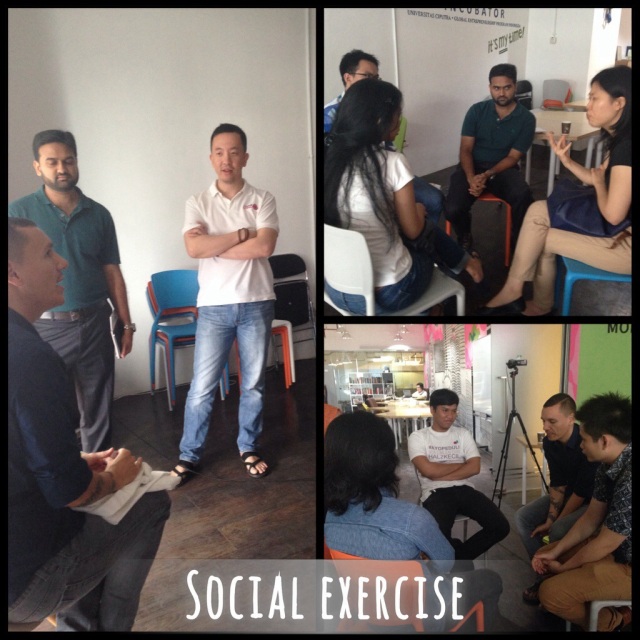 After sharing stories from the guest speakers, we gathered in small group to think about what kind of business idea that can impact society. Each group presented their discussion to the rest of the audience. It was very nice discussion. It only took us 15 minutes to come up with an interesting idea and even got into details about what, where, when, who and how the business would be. This was how the meetup ended.

Regardless it was a month late, I think the information is not less important to share.

One thought on “Young, Creative and Inspiring: Social Entrepreneurs in The New Concept of Positivo”

What are you looking for?

Our posts in months